Life got a little busy, so I'm posting this now.

We left the story with our return, exhausted, to our digs at midnight on Saturday after the masquerade.

We continue now with Sunday... but first, here is a drawing of Judge Lust, from my alternate dimension Bright Judges: 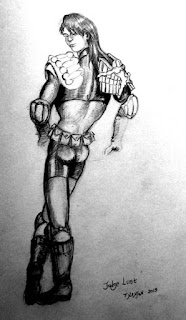 We were in charge of getting the time portal back to England and I had decided that it would be too complicated to try to do that on Monday morning, as I would also have to collect any unsold art work then. We were going home on Tuesday morning, but I had already checked that there was no possibility of my art being stored till then.

We had to attend an 'after Masquerade' programme event in the afternoon, but hat also meant we could collect our certificates and pick up the paperwork we had put in for workmanship.

Monday morning was dedicated to getting my artwork back to our digs. We decided to use the tram for this and got all the unsold work off the wall, wrapped in bubblewrap and into the appropriate bags.

As I have previously posted, I sold this cartoon: 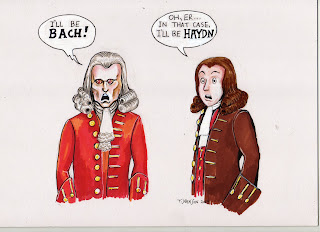 I was hoping to sell more ( As at Loncon in 2014 I sold two cartoons and a painting), as, allowing for the hanging fee and 10% commission, I will still be out of pocket.

Anyway, by the time we had got everything back to the flat, it was lunchtime, so we spent the afternoon going to a few programme items and in the Dealers' Room.

We were going home on Tuesday and had to be out of the flat by 10.30, so we got up earlyish,packed, cleaned the flat and put all our stuff in the hall ( as we were two flights up), before paying for parking and getting the car. We had checked with the lady we were renting from that it was OK to park right outside, as long as someone stayed with the car, so getting the car packed was a lot easier and we just about made the deadline.

We realised that we would be very early for our 2PM ferry, but, as I wouldn't be relaxed leaving the car parked anywhere with all our stuff in it, we elected to go straight to the ferry port anyway.

This time we could see a terminal building( and how to get to it) and as we were very early, decided to go and get a coffee. We didn't stay away very long and waited with the car till the gates opened.

This time our car was parked right by the doors at the front of the ferry. I remembered to turn off the alarm again and we went up to our seats( this was a fast ferry, so there was no lounge). I had promised myself some good Irish whiskey, so I went to the shop and bought a bottle of Conemara ( peated single malt) and a bottle of Teeling small batch ( rum cask). The crossing was wet, and the ship rolled more, but I was still alright.

Teddy could not remember if he had booked the Wednesday off and I wanted to be sure to refill Dad's pill box, so we decided that we would try to get home in one run. The ferry was running a bit slow and arrive about an hour late at 5.30 ish

We drove off the ferry, across to Anglesea, across to Wales, then the Sat Nav directed us off the
road we had come in on and onto one the took us through the mountains.

Now, I knew that it had taken just over half a tank of petrol to get to Dublin and I had had no opportunity to fill up the tank again. The road through the mountains was wonderfully scenic, but it was tipping down with rain, the road was all curves, there was a lot of down right next to it and the road signs warned us of falling rocks, skidding cars and ( obviously dangerous) black sheep.

Most of the sheep were white ( thank god) but the road was still quite difficult in those conditions and there were NO petrol stations.

We were down to a quarter tank when we got out of the mountains. Then there were a few petrol stations, but this was rural Wales after 6PM and they were all closed.

Luckily, before the needle hit the last red section, we came to a town with an open Texaco petrol station and ( once I'd worked out that the pump didn't turn to zero until I put it in the car, unlike every other pump I have ever used) I filled the tank and we set out again.

We got out of Wales and across Shropshire and stopped for supper at a services on the M42 . As we had forgotten to buy the essential shopping for Wednesday morning we realised we would have to stop again, but I wanted to put on a bit of distance before we did. We did a brief shop at Oxford services on the M40.

Soon after that our Sat Nav threw a bit of a wobbly. A few times that day we had been directed off on windey roads to avoid traffic problems, so when it directed us off on the A40, we assumed we would be rejoining the M40, or end up on the the M25.

The Sat Nav had other ideas and took us a convoluted route via Uxbridge. Most of the route was through town and often thorough 20 MPH zones littered with speed cameras. I would have much preferred to stay on motorway even if it was a longer route, as I find that kind of driving easier, especially when I am tired.

Anyway, once it got us to Brentford, I turned the bugger off, as I knew where I was. We crossed Kew Bridge, got onto the South Circular ,I took us home via Putney AND I BEAT the Sat Nav's estimated arrival time by ten minutes.

We got home at midnight, emptied the car, Teddy checked his emails and found he had booked the Wednesday off and we got to be a 20 mins past midnight.

I rang Dad on Wednesday morning to tell him I was back and coming round and he said I would find things had changed. This rang alarm bells and I hurried round.

I discovered that there was one thing I hadn't thought of before going away( There's always something...)

The batteries of the pill box had chosen the day I went away to run down, so my Dad had missed week's worth of pills.

Now, I had taken my mobile phone with  me and left him the number for emergencies such as this. If he had called me I might have been able to talk him through changing the batteries.

Luckily, he was mostly alright. He had no batteries in the house, so I went out, bought some, put new ones in the machine, checked all the settings and made sure he took the right pills for that time of day.

If there is a next time, I'll try to remember to put in new batteries before I go, just in case.