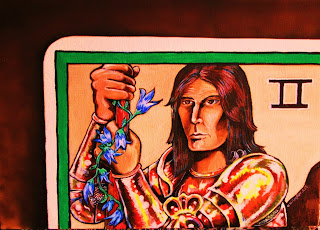 Adieu
Posted by Tom Nanson at 06:27 No comments:

Last weekend I took part in the Grand Medieval Joust at Eltham Palace.

As a member of the Paladins of Chivalry, I am only allowed to take photos before the public are on site, after they have left, or if I change back into modern kit.

I was able to get a shot of my tent, banner, standard and achievement of arms when it was finally all ready, but  not, unfortunately before the Duke of Lancaster had moved his car... 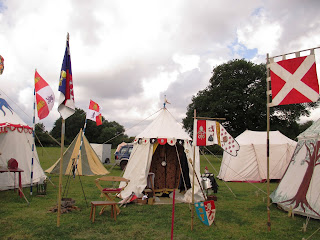 Here is another picture of my tent within the camp 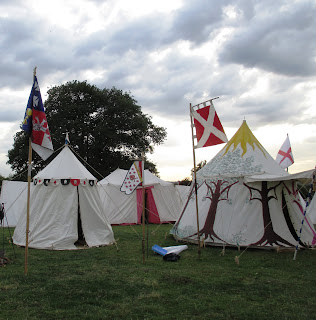 I spent some time in the off-season painting the dags of the roof with the bishop's mitre badges.

The bishop's livery colours are black and white and one of his main badges is a red mitre( as can be seen on the standard), so I have painted red mitres on the white dags and white mitres on the black. As there were an odd number of dags, I painted a papal tiara on a red ground to go over the doorway. 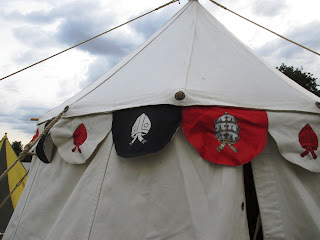 The inside of the tent is dived in two by curtains, with my sleeping area behind. 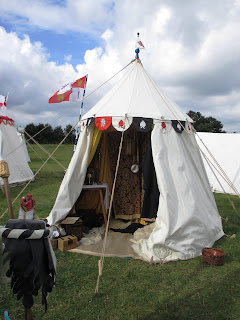 I have a small table set up as an alter in one corner and try to sing a mass at least once during the weekend. This time I sang it on Sunday morning soon after the site opened at ten. 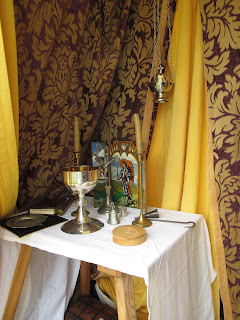 You will notice from the first picture that I had a fire box set up in front of the tent. I lit a fire in it using flint and steel on Saturday ( only nicking myself once on the flint) and then used a coal from the fire to light my thurible (which can be seen hanging up in this picture) so I could cense the alter and bless the weapons in the arming tent.

There was a strong breeze all day Saturday and the pile of wood only lasted to mid afternoon.

The foot tourney went well and it wasn't too hot, as the sky stayed kindly overcast. I also had a lot of fun being the marshal and commentator for the kiddies battle later in the afternoon.

I closed the tent after the tourney on Sunday and started to pack some things up, which helped a lot when it came time to break camp.

All in all it was a good show.

I often put interesting buildings into my Landscape of Dreams and utilise watercolours I have painted in the past,

Here is a watercolour of the gatehouse of St David's Cathedral.

I haven't reused this image in a oil painting to date, but , as an interesting building, it may well find its way into a future painting. 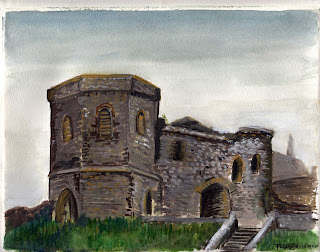 I have recently done some more to the oil painting I am working on.

I have been working on shadows and distance and it now looks like this. 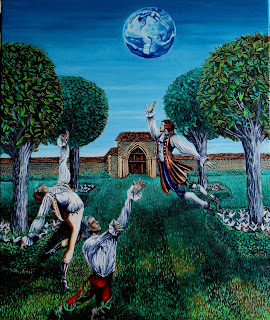 I will post again when I have done more to it

Adieu
Posted by Tom Nanson at 04:03 No comments: