Here is a new cartoon based on Dr Who. 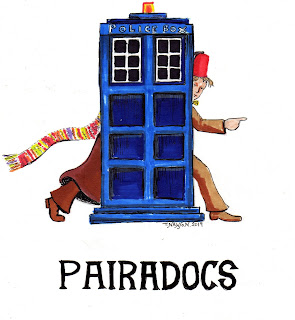 Adieu
Posted by Tom Nanson at 00:18 No comments: 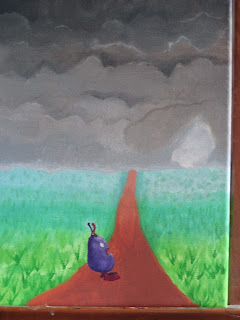 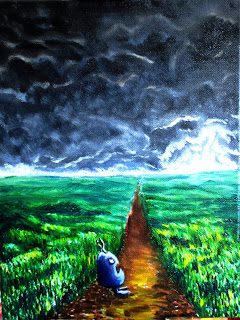 When I was at the last Re-enactors' Fayre (TORM) I saw an officer's dress sword for sale and , on closer inspection, realised it was from the reign of William IV (1830-37) and in very good condition.

The hilt was gilded brass with a silver monogram on the shell guard and silver wire on the grip and the blade had good quality floral etched engraving.

It had no scabbard, but when I expressed my interest, the stallholder produced the brass throat and  chape. He said that the scabbard and sword knot had both disintegrated despite his best efforts to save them.

The price was already reduced to a very reasonable one , added to which there was a further 20% off everything on the stall.

I was owed a birthday present from Teddy, so he bought me the sword, as I was sure I could make a new scabbard.

When we went to the other (alternative ) market (TARM) , I found a nice Napoleonic bullion sword knot and bought it.

Now we come to the scabbard making and much experimentation.

First I wanted a rigid scabbard, so I gouged out the sword shape from wood , leaving small raised walls for the edges of the scabbard. This meant that the wood had to be thinner at the two ends to allow for the chape and throat.

Unfortunately the edges of the wooden scabbard proved too tight for the blade, so I remade it with a thin side wall.

This seemed to work, though the middle of the scabbard was much thicker than the chape
and throat.


And, again unfortunately, when I sewed very thin leather over the top, not only would the leather not fit under the chape or  the throat, but the modest addition pressure of the leather being stitched over the wood was enough to stop the blade passing down the scabbard.

I considered using only one wooden side, but , in the end, opted for a soft scabbard.

Luckily, I had some slightly thicker black leather which enabled me to butt-stitch (if I was very careful), as if I was using the belt-thickness leather I'd use for an arming sword scabbard.

I had to make a guide hole for each stitch using a sharp glover needle. I then carefully widened the hole with an awl before sewing with a blunt saddler needle

The leather was carefully measured and cut and sewn, edge to edge , along the blade

I then pressed the scabbard for a day to ease it round the blade. After this, it had eased for over half its length, but was still quite tight at the tip end. I pressed it again for several hours at the tip end.

I glued the chape and throat in place and added the sword knot.

The scabbard is still quite tight at the point end and requires adjustment to draw and sheath, but this will get easier over time and I will not need to draw it , or sheath it quickly anyway

Whilst the wooden scabbard did not work in this instance, I had never tried making one before and still feel I have learnt a lot through this attempt.

Adieu
Posted by Tom Nanson at 04:56 No comments:

Here is a new superhero painting.

This is painted in acrylic.I have used masking and airbrush to create some of the effects.

I have called this painting 'Redstrike'. Adieu
Posted by Tom Nanson at 04:51 No comments: