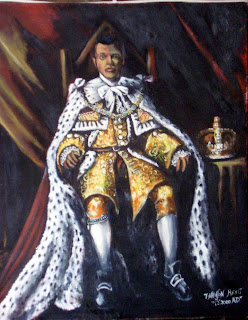 This was a life painting I did when I was at art school. The subject was only wearing red briefs and the background was a part-painted theatre set consisting of faux- wallpaper in a rather bright magenta.

When I looked at the painting again, many years later, I was struck by the nobility of the model and, initially, thought of redressing him as some sort of tribal chief.

Then, as I was going through my postcard collection, I came across the Ramsay portrait of George III... 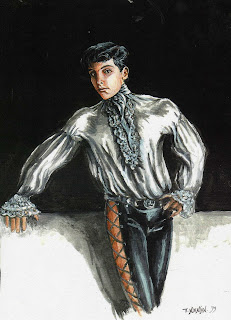 I painted this small acrylic way back in 1999.

I am still quite fond of this one.

Adieu
Posted by Tom Nanson at 04:05 No comments:

I write and sing Science Fiction based music (Filk).

Here is an Album cover that I was commissioned to do for a friend’s band. 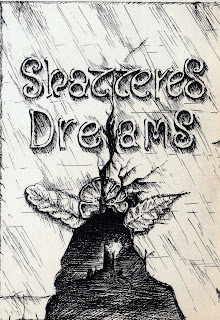 I tried to make the cover look like a carved marble slab, fractured at the base, showing a burning tower on a hill beyond it ( one of my friend's most well-known songs features a tower being burnt down just before dawn).

The album before this was called ' The Oak, The Rowan and the Wild Rose' and used the leaf and flower symbol, so I used it again to show continuity.

Realm of the Gods

I have now completed my latest oil painting. 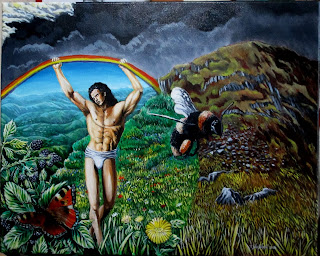 I have called it Realm of the Gods. 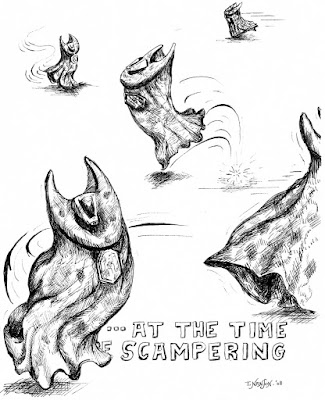 This cartoon is based on a Babylon 5 episode.

The Vorlons were always so stately and dignified. So, when Kosh tells someone they should be meeting again ‘at the time of scampering’ this image popped into my head.

Unsurprisingly, I sold it at a Science Fiction convention.