Here is a real achievement I painted up for my friend Edmund.

I only retained  the drawn achievement, so I have re-coloured it in photoshop. 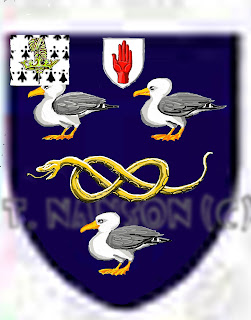 This is a modern coat for a baronet and is blazoned:
azure a snake nowed or between three seagulls proper on a canton dexter chief ermine a plume enfilling a coronet both or on an inescution centre chief argent a hand gules.
Until next time
Adieu

Knight in the Stable

Here  is a drawing from my sketch book. 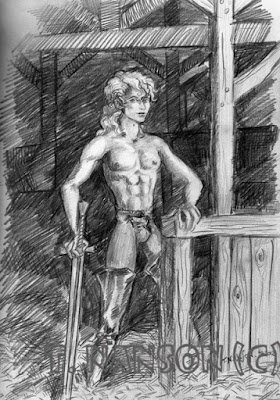 Here is my marriage coat, following the ruling by the College of Arms, with my arms on the dexter. 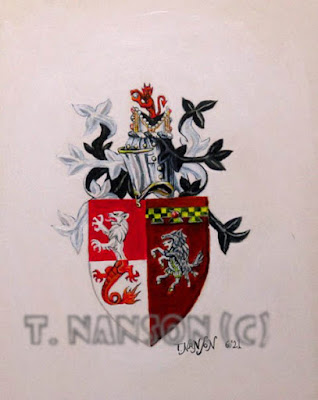 Dexter per fess gules and argent a demi lion rampant defamed and the base of a dragon volant tail enflamed conjoined and countercharged impaled with tenne a sheep in wolf's clothing ranpant proper in chief on a label of three points dovetailed chequey vert and or a russet apple with a bite taken from the sinister chief proper.

Here is a new drawing of  a young hunk using monochrome coloured pencils. 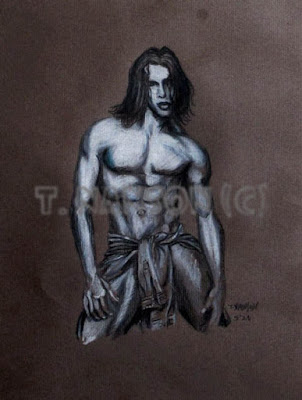 The College of Heralds rules state that the arms of husband and wife and shown impaled, with the husband's arms on the dexter.

This is a marriage coat.

When same sex marriage was written into law, the Heralds ruled that the arms should still be impaled, but that for one each husband displays their arms on the dexter.

I have now painted up the two marriage coats.

This is my husband, Teddy's. 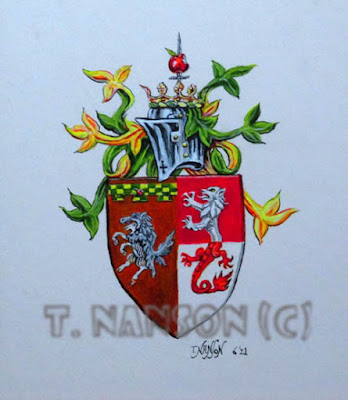 I served as King of Arms for the Far Isles Medieval Society for many years and retain my former title of Dragon Herald.

His arms reference his two former personae as Guy Elfkin, a Renaissance fop, and the Eurgh, trainer of the Chadwell Killer Sheep.

impaled sinister per fess gules and argent a demilion rampant defamed and the base of a dragon volant tail enflamed conjoined and countercharged.

The crest reflects that Guy Elfkin was once King of the Far Isles and further references Teddy's former persona, Violetta di Stiletto

The crest is blazoned

Within a coronet of apple and oak leaves a russet apple proper with a bite taken from the sinister chief impaled on a stiletto hilt in base.

I shall post my marriage coat in due course.

I spent many laborious and boring hours figure drawing whilst I was at Art School, but it means I have a better understanding of how the human body works and am now able to work from found imagery.

I have, however, always found hands to be the most difficult part to draw, as they have innumerable positions, foreshortening, angles etcetera.

Here is a page of hand studies from my sketch book 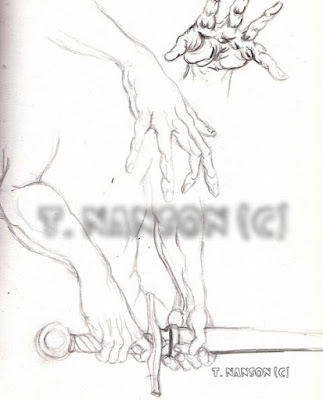 I posted earlier about a preparatory drawing.

I have now completed the painting. 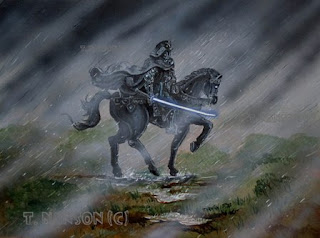 It is painted and airbrushed in acrylics.
Here is the drawing again, so you can see where I started from. 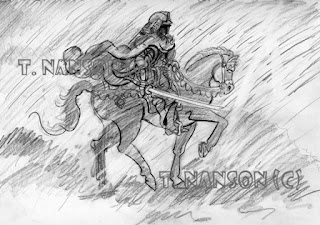 I am quite pleased with the way this has come out.
Until next time
Adieu
Posted by Tom Nanson at 03:43 No comments:

Here is drawing of medieval musician from one of my sketch books. 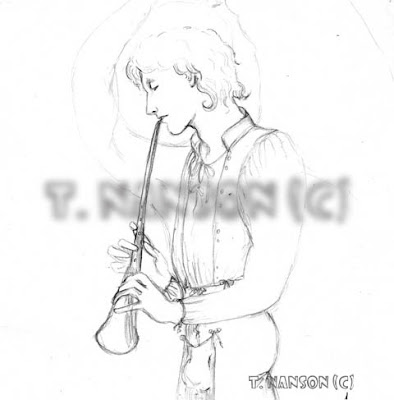