I have done further work to the new painting.

I have tightened up the painting of the Peacock butterfly, using Cadmium Orange and Lemon Yellow.
I have also done more work to the landscape, working into the detail with Burnt Sienna, Indian Red, Titanium White, Coeruleum Blue , Ultramarine and Lemon Yellow. 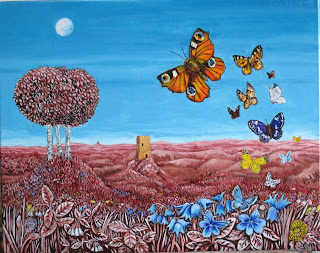 I think that the under painting is nearly complete.

At this stage (and often at subsequent stages) I will leave the painting to dry and will ‘live with it’ for a while, spending a bit of time looking at it, until it tells me what needs doing.

There are usually a few bits that need tweaking, but I have to put a bit of distance between me and the picture before they become apparent. It is very easy to get too close to a picture and miss things.

I do occasional sculpture and other three dimensional works.

Here is a Nerf revolver I Steampunked up. 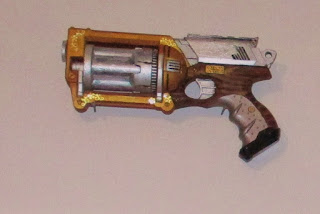 This was all painted in acrylic by brush, as I didn’t have the airbrush when I did this.

I used card craft stickers to get the embossed floral designs and covered the one part I that I couldn’t mini-drill smooth with a brass dedication plate made from the thin plastic from an  old Airfix Napoleonic cavalryman kit.

I am particularly pleased with the wood effect. I made sure that the grain was consistent through the piece.

Once I was happy with the effects, I applied several layers of spray mat varnish to seal it.

I think it’s come out quite well and is still functional.

I bought a great helm as part of my kit for the Paladins of Chivalry, as it looks quite good to come onto the field wearing one.

I decided that it would look even better with mantling, a wreath and a crest.

My character, Bishop de Velmont, has livery colours of black and white and two badges. The first is of a red demon climbing a black hill holding a pearl and the second is a red mitre.

Usually the mantling and wreath would be cloth, with one livery colour on the outside and lined with the second, but I decided to make my mantling from leather. This would not be lined.

The first problem was making a pattern for the mantling. I solved this by making newspaper patterns on a trial and error basis until I hit one that worked. I then particoloured the mantling, to show both livery colours and made a padded wreath with strips of the same leather.

The top of the helm had a slight ridge to it, so I hammered a point on the ridge to flatten it a bit before drilling a hole.

I then made a corresponding hole in the centre of the mantling and buttonhole stitched it to strengthen it.
I decided that I would combine the two badges to form the crest.  I came up with a white mitre with a demi-demon holding a pearl issuing from the middle of its black gusset.

The mitre stood for one badge, with its black gusset (as the slope of the hill) l and the demi- demon with pearl standing for the other badge. The white exterior of the mitre would reflect the second livery colour.

My wood carving skills were fairly basic and I only had access to an off-cut of decking that had quite a wide grain, so, for version one, I decided to use my leatherworking skills and made the black gusseted white mitre from leather, gluing some gold braid on to form ormphries.

A plastic plant pot  with the base cut out was used to  maintain the mitre’s shape.

I then used a craft knife to carve the demon as best I could, leaving its face a flat curve and painting in the detail, and drilled a hole in the base.

I then cut an opening in the mitre gusset and poked the demon through it.

A single screw, passed through the inside of the helm, through the mantling and into the base of the demon, holds them in place and the wreath is held in place by tension.

This is the result. 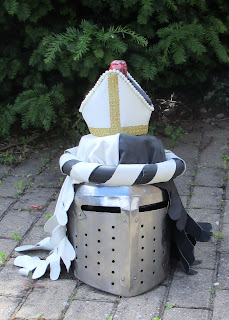 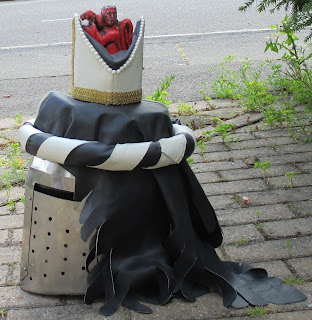 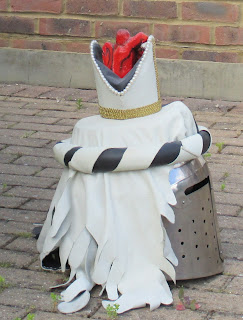 More work has now been done to the butterfly picture.

I have done some work to the sky and have tightened the detail in the landscape and foreground with Burnt Umber, Burnt Sienna and Titanium White. 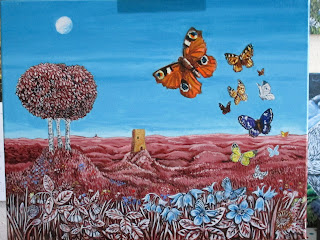 Further work is still required to tighten the detail before the under painting is completed and I can begin to glaze over it.

Adieu
Posted by Tom Nanson at 08:59 No comments: