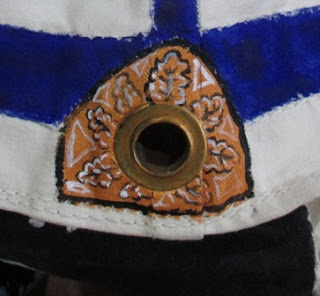 This one is oak leaves 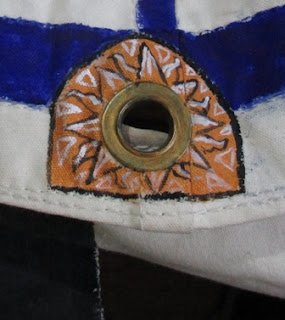 and this is another Sunne in Splendour

I am a fan of Sir Terry Pratchett's Discworld books.

In Equal Rites, he established that a girl can be a wizard.

Thus, I reasoned, a boy can be a witch. 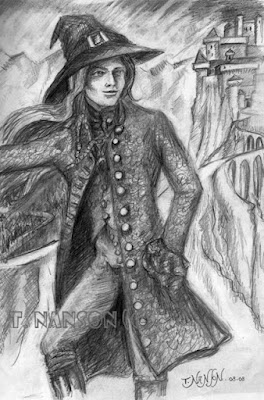 I've always maintained that equality is a two way street.
In fact, some time after this picture was drawn, Sir Terry's last book showed that he agreed with me...
Until next time
Adieu

Here are two more of the cartwheel spoke decorations from the tent.

and this one shows episcopal accoutrements: processional cross, crosier and mitre.

I took part in a re-enactment event at Hever Castle over the August Bank Holiday.

Quite a number of the Paladins also attended and, as these pictures show, we had a magnificent encampment. 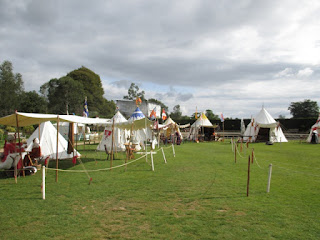 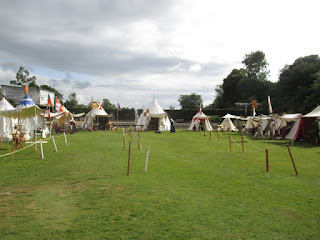 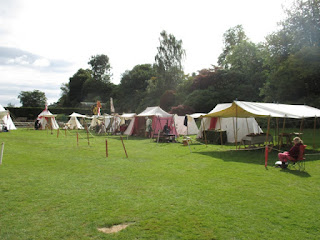 We had good weather and it was quite hot, which meant that public attendance was quite high.

We were scheduled to do a tourney each morning and a battle( together with all the other medieval groups attending) each afternoon.

As in previous years, we arranged that each group would split their forces between attackers and defenders so that they fought their own people. This ensured that any difference in fight style was less likely to cause a problem until the final melee( where all fought all).

I made a bit of an error on Saturday. I thought we would be marching straight on to the field, so I opted to make a splash by wearing my great helm to march on.

I t was dry and overcaste and I thought I'd only be wearing it for a few minutes. Unfortunately, the Vikings were on the field before us and took longer than expected to finish their battle.

Once I realised we would be waiting longer, I had someone get the helm off me and only put to back to march on.

I fought first against Tony and it all seemed to be going well till near the end, when I realised something was wrong and got him to kill me , which is when I stared dry-heaving from heat-stroke and had to be helped off and stripped of my armour.

I did not fight in the afternoon, but went on in robes and blessed the defending troops.

Having learnt my lesson, on Sunday and Monday I left my great helm at  camp and chose to also leave my brigandine, wearing just bassinet, leg and arm harness and trusting to my parries and arming jack to protect my body.

I also trusted to a distance weapon and fought with a polearm. I refer to it as a Clerical Bill and , hence, call it Peter's Pence.

It proved most effective.

As usual, I sang a mass on Sunday morning and had quite a reasonable congregation. Indeed, so many took the host, I will now have to restock my pyx. These included some of the resident re-enactors( playing the parts of Lord Boleyn and his family-luckily residing in the 1525 that weekend)

I had many nice comments about the mass and several people indicated that they had been spiritually uplifted. I am glad off this and hope it shows the approval of  a greater hand.

I just try to approach this task reverently and do my best.

Here is a picture of my tent, with my banner, standard and gonfalon. 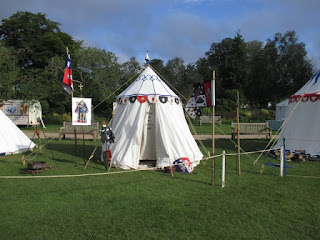 It was a good event, marred only by a couple of injuries on the field, two of which required a short attendance at the local A & E. Luckily, neither turned out to be more serious

It also showed me that going to a three day event and fighting in armour five times after a period of about two years without any events requires about four , or five days recovery time...

Here is a drawing of a Glider Elflord  from my sketch book. 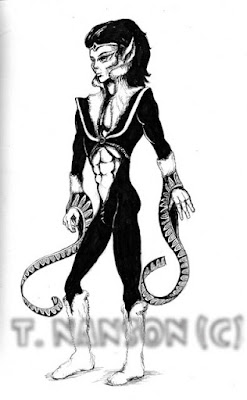 The tent in use

I recently took part in a re-enactment at Hever Castle.

Here is a picture of the tent showing the new roof decorations and the privacy screen hanging inside the door. 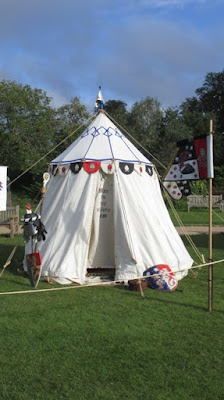 Here are two more of the spoke-end decorations on my tent. 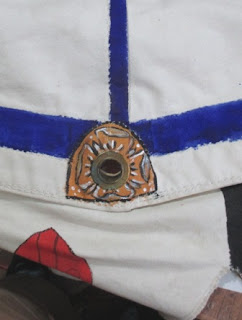 This one is a four-petaled heraldic rose 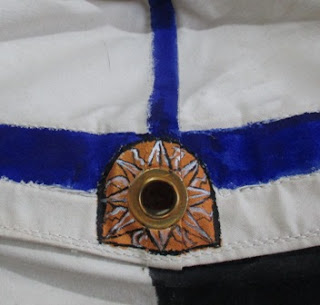 and this one is a sunne-in-splendour

Here is a drawing I found in one of my sketch books. 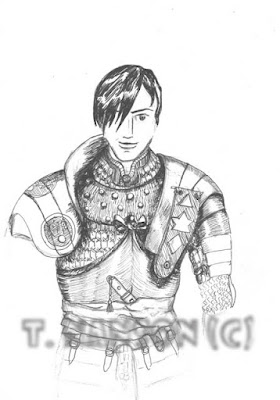 This seems to be an experiment with a fusion of European and Oriental armour styles.
Until next time
Adieu

Here are two more of the cartwheel spoke-end decorations. 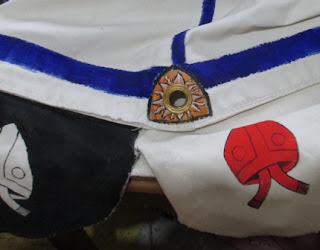 This one is a sunne-in-splendour. 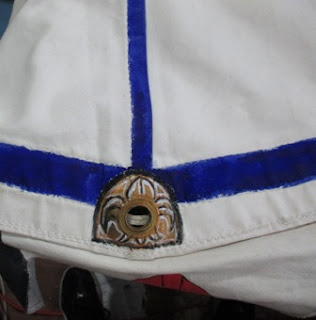 and this is a fleur-de-lys.
Until next time
Adieu