The Bishop on the BBC

I  and my fellow Paladins of Chivalry have appeared on television.

We were shown on Inside Out (South East) on 26 February as part of a segment about scientific tests being made on the Black Prince's Great Helm, which has hung above his tomb in Canterbury Cathedral since his death.

We spent the best part of one Saturday being filmed processing through the Cathedral gate and laying flowers at the tomb. A few of us were also interviewed.

Having been filmed before, I was well aware that only snippets would actual be used in the final program.

We were told when the program would be shown and I duly set my recorder.

Unfortunately, Inside Out is a regional magazine program. Thus, the version I recorded was Inside out (London)and not the right one (Inside Out ( South East).

I have, however, now seen the episode of Inside Out (South East) on BBC IPlayer.( I am hoping I can find a way to download it for posterity) and was gratified to find that I was one of the people that they chose to focus on.

The segment ends with me approaching the tomb to place my rose ( though they use a shot of someone else's hand putting the flower down.

We did the filming for expenses only, as it was good for the group to get us on Telly and also to get an 'In' with the BBC and I think we made a good showing.

Pity it was only regional, but still we may have made an impression on people who've not heard of us.

So- Fame. Only in the South East, but still fame.

Adieu
Posted by Tom Nanson at 03:43 No comments:

Here is a drawing of a nice, fit  young man in red shorts. 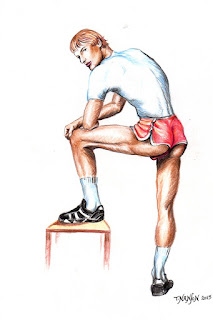 This is an Acrylic painting I did at College after visiting  a swimming pool with observation windows. 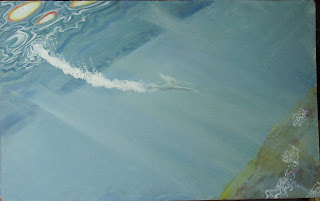 Adieu
Posted by Tom Nanson at 03:34 No comments:

Yet another painting for Louise

Here is another of the wall paintings that I did for my friend Louise in Bristol.

This is a wading bird . It is called a Corncrake. 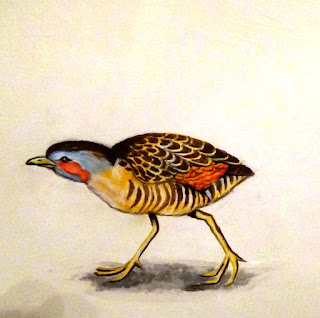 I painted this on a bit of wall under a window. As there are longish curtains, this is only visible when the curtains are open.

Adieu
Posted by Tom Nanson at 03:45 No comments: