We rejoin the story on Wednesday morning leaving the Halfway House to get to Holyhead Ferry Port.

But first , to sustain you, here is a kinky Dalek cartoon... 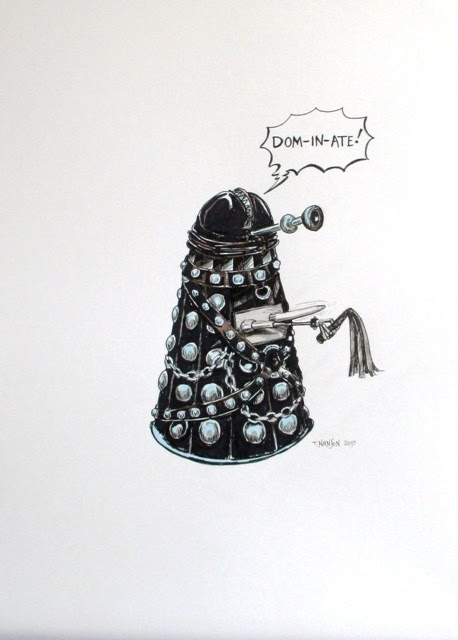 Now back to the story...

We had been provided with instructions on the route by Mine Host and, despite taking (probably) a wrong turn, got onto the right road and made our way past Shrewsbury and into Wales.

We crossed onto Anglesea, avoided complications due to the Anglesea Agricultural show and arrived on Holy Island. We got to the Ferry Port earlier than we needed to.

I was expecting to end up in a car park from whence we would be directed to the appropriate gate for the ferry. I had hoped we could go and find lunch while we waited, but it was not to be.

We found ourselves in an already formed queue, with the additional wrinkle that several cars ahead of us were empty of passengers and drivers.

We waited, we could do no other. It was not clear when the gate would open and , with our car full of our stuff, I was unhappy heaving it in a vain search for a terminal building( to which there were no signs).

As it was, when the gate opened several people had not come back to their cars. Other cars had to manoeuvre round the empty ones and we were about to do the same when the owners arrived back at a run, shouting at US, as if WE were responsible for THEIR absence.

Anyway, idiots aside, we presented our tickets, got our priority sign for the car and moved on into the port. It was lunchtime and I was worried about going Hypo.

We also read on the priority notice that we had to turn the car  alarm off , so Teddy had to look up how to do this in the manual and I located the right button. We were directed on to the ferry , parked , turned off the alarm and found our way to the lounge.

My priority then was food. There was snack food in the lounge( which I later found out was free), but my mind was on substantial food, so I found my way to an open outlet and got some. I bumped into Mike Percival on the way to food, so was unsurprised to he and Maggie had joined us when I got back.

We also found the two more friends  had been switched to this ferry. I was still worried about feeling seasick, as I hadn't been on a ferry for at least fifteen years, but the swell was moderate and the conversation also helped distract me, so I was fine.

We got to Dublin and ,as we had agreed on the boat, drove to Mike and Maggie's Air B &B to leave the Time Portal and my paintings ( as their digs were closer to the convention centre). We then drove to our digs, with me carefully keeping out of bus lanes,as I didn't know local laws.

I had to stop in a loading bay when we got there and Teddy went to alert Alice and Paul, who had flown out and arrived earler that day,and should already be in the flat. Then he came back and said that the intercom was broken and he couldn't let them know he was outside.

Luckily, when he went back again, Alice happened to look out the window and saw him. We then hastily emptied the car, with me staying with it, anxiously watching in case we were told we had to move on. Car emptied and our set of keys collected we put the postcode of the car park into the sat nav and drove the car there.

The turning space for the ramps was very tight for my car,as were the space, but we got it parked eventually, pressed buttons again to set the alarm and made our way back to the flat, where I collapsed gratefully and let the other organise supper.

The next day(Thursday), the priority was getting my art up in the art show. We arranged to pick up the four bags of framed  pictures and one bag of  fimo figures and carried them across the bride over the Liffy, past the conference centre and back halfway to the ferry port, to the expansion space assigned to the artshow.

I had paid for a space eleven foot wide and four foot high. I had to fit in nineteen framed painting of various sizes and ten wooden plaques with fimo figures on them ( this is the highest number of artworks that I have ever had in a show). I had also been given a space right next to Jim Burns ( a well known professional SF artist of may years standing).

It took me quite some time to get all the pictures up and the display balanced. Then I had to add the bid sheets. This resulted in a further hour and a half of picture shuffling, but I managed it. I got all the pictures and figures up with their bid sheets placed without the need for arrows indicating which bid sheet related to which picture.

Jim  Burns said he did his displays the same way. Get as many pictures on the wall as possible and them furkle where to put the bid sheets.

A bit more of the day was taken up with rehearsal for our masquerade entry and making last minute decisions, such as which of three spearheads to  glue on to the spearshaft. we went with the first clear resin head, which had a milliput base painted to look like bronze. This turned out to be a mistake, but more of that  in the much anticipated PART THREE...
Posted by Tom Nanson at 02:10