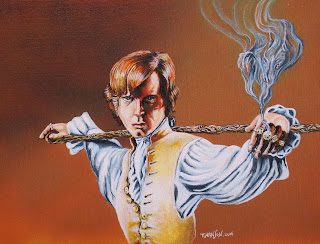 I have recently completed this acrylic painting

I have called it  'Magister' 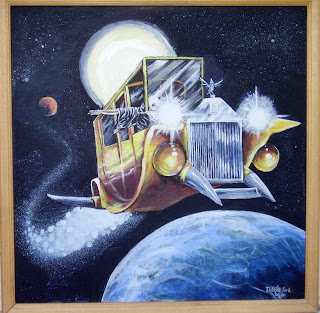 I painted this a good few years ago, but I still quite like the image.

It was inspired by some drawings I made of a Rolls Royce ( I think its a Phantom)  in a museum. I have always liked the style of  this  particular car.

The title is due to the skeletal driver signalling the wrong way.

Adieu
Posted by Tom Nanson at 07:27 No comments: 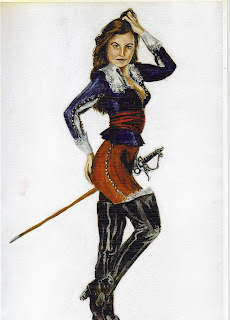 This  acrylic is the second version of this painting. The first version was ink on paper and was sold many years ago.

I   have read Alexandre Dumas stories of the three musketeers many times and have enjoyed many films and series based ( to varying degrees to be sure) on the books .

I was also once a member of the Sealed Knot and, hence, had made Seventeenth Century suits.

However, as I wished to maintain the young lady’s  silhouette as much as possible, I decided to shorten her doublet and tighten her britches... 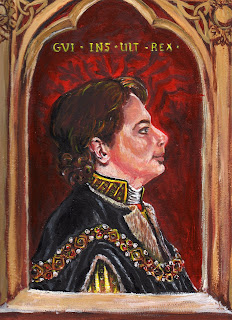 Both Teddy and I used to be members of a medieval re-enactment society called The Far Isles.

The society did not do public display, but operated purely for the amusement of its members.

Members could choose to portray characters from anywhere in the world between the years 500 and 1603, as long as they were not actual historical people.

It had started as a principality, which  become elected  after the retirement of the first princess. It then became a kingdom with an elected monarch, with a fixed term reign.  Serving Kings could be re-elected twice.

Teddy  was the first king and served  for eleven  years.

I used the famous portrait of Richard III as my inspiration and dressed King Guy accordingly.
In the background of Richard’s portrait is the abbreviated Latin : Richard Rex Ang—Richard king of Englnad. So I did the same thing for Guy Rex Insulae Ultimae- Guy , king of the Far Isles.

It is a little unfortunate that the abbreviated form reads: Guy  Ins  Ult...

No one seemed to mind, however, and my character got the job..

Adieu
Posted by Tom Nanson at 02:47 No comments: