There was an occasion when I was heralding an event for the Far Isles Medieval Society that I noted a guest had brought a shield with him and, without seeking consent of the herald (as was customary), had set it up displayed in the feast hall.

I was, thus, required to inquire the identity of those arms in Court.

This is a representation of the shield:

This required careful and distinct pronunciation, because the blazon for this is...

Or  Semé  Of  Thistles Sable

The painting is now finished.

I have called it Metamorphosis. 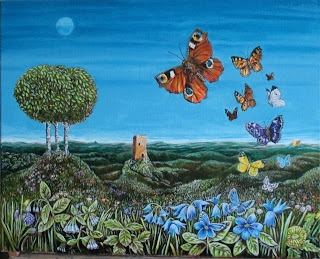 The main part of the composition is based on a earlier painting and it is about mutability and change in general.  Look closer at one of the blue flowers...

Adieu
Posted by Tom Nanson at 06:37 No comments:

When I was serving the Far Isles Medieval Society as Falcon King of Arms, I was asked to design a new charge to form part of the achievement of Sir Nai Cantrell, Earl of Foresthall, knight of the Golden Oak.

Sir Nai had once defended himself at a revel using only his spoon and wanted a Warspoon on his arms.

I started with the concept of the warhammer and chose a fifteenth century all-steel example.

I then designed the bowl of the spoon to be tear-shaped to give it a sharpened edge.

Finally, I referenced the earl’s Celtic leanings by adding a heart pommel, based on welsh lovespoons. I also felt that this would lend a level of irony to the charge.

The final design would bow be used as a template for any other person wishing to have  a warspoon charged on their arms. 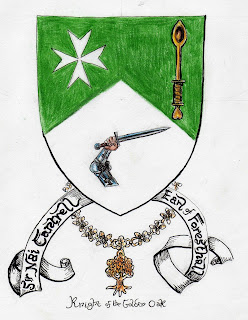 The blazon is : per chevron vert and argent in chief a maltese cross of the second and a warspoon or bowl in chief in base a armoured arm  embowed couped holding a sword proper

I have started to add glazes over the initial green to enhance the foreground detail and the illusion of distance. 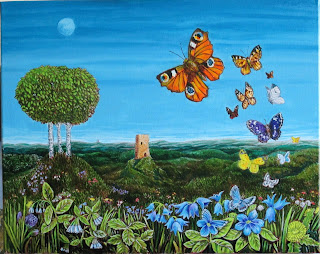 Once it is dry I will do more work to the detail of the plants and butterflies.

Adieu
Posted by Tom Nanson at 04:25 No comments: