I have been doing more decorations on my tent roof.

I have previously painted the dagging and have now completed the arcading and decoration of the spoke holes and storm-guy spacer.

Here are some pictures of the arcading. I will post pictures of how it looks with the tent up after the next event.

I chose blue for the arcading, as the tent came with a blue finial knob.t 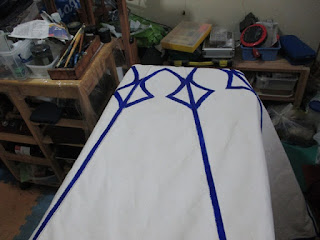 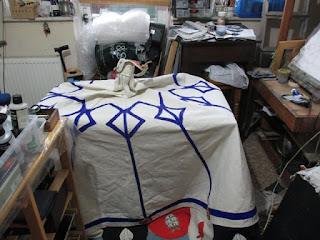 I have been spending some time enhancing and decorating my tent.

This is the flag I painted for the finial. It shows the bishop's red mitre badge. 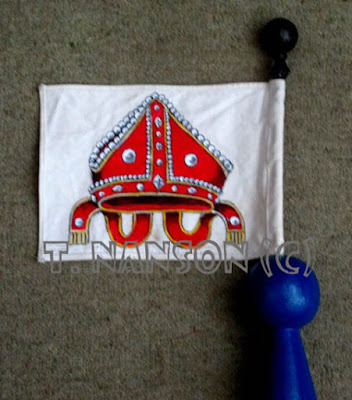 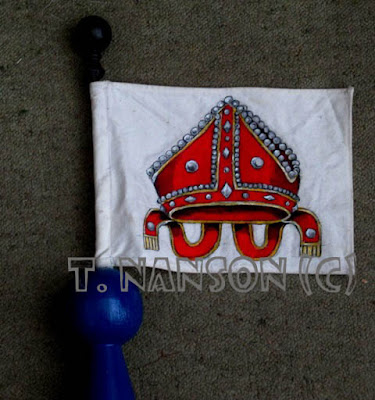 A few weeks ago I went to my first post-lockdown re-enactment.

I packed the car on Friday morning and drove down to the site (Just beyond Salisbury) after lunch.

The event had moved since the last time I had been and was a lot easier to get to.

Once I got there, however, I had to follow the magical mystery tour getting on site and wait until they could form a convoy led by a guide ( who should really have been issued with a red flag).

We then had to empty our cars and form another convoy to the car park, so I had no opportunity to leave modern packing boxes, golf bags etc in the car and, as the carpark was some distance away, it was not practical to take them there after set up.

Consequently, I had after the tent set up so all these extra bits were concealed.

I had come up with a quicker way to rig the yellow curtains  by threading and fixing them on to a rope that could then be hung from the cartwheel and tent sides using 'S' hooks. This worked very well.

I then threaded the rings of the purple curtains directly onto the cartwheel spokes.

Here is a picture of the campsite with all my flags flying, which I took on Sunday morning. 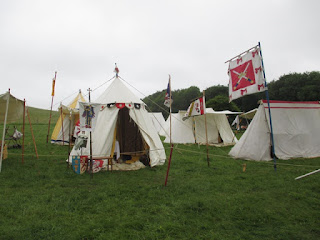 Saturday started out looking like perfect re-enactment weather, as it was sunny , but cloudy.

Unfortunately, it soon became clear that it was quite hot and very humid.

Luckily, the organisers had not arranged for any battles or tourneys and, despite the fact we had had to put only a modest fight area to the rear of our encampment ( and this was on quite a slope) , we each spent some time there training in jacks, helms and gauntlets.

I then did an Arming of the Knight in the afternoon ( with young Rupert squiring) and did a circuit of the site in full plate. It was hot and humid enough for me to be quite glad to disarm once I got back.

Here are some more pictures of the encampment, 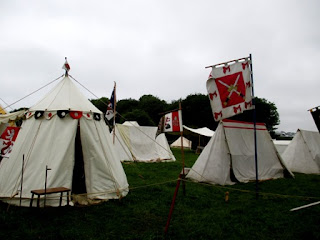 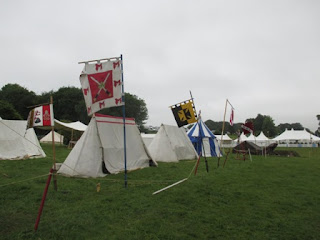 I set up my awning next to my tent and sang mass under it on Sunday morning. 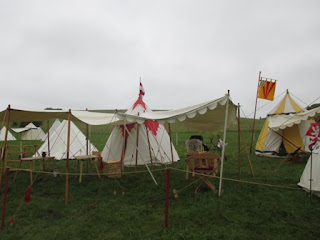 There was minor fly in the ointment when we were told that one group had all gone to the beer tent and come back to find their tents had been ransacked and stuff stolen ( despite site security).
Luckily, we had had people in camp that night , but we arranged camp guards from then on.
We had a moderate number of punters, but,as in previous years, they were mostly good quality punters.
Most could recognise a bishop and several translated the Latin motto on my standard.
Sunday was wet- occasionally very wet.
We were initially told we might be allowed to pack up and go early, but this didn't happen and we had to form up a convoy in the carpark at 6.30.
I had closed the tent after lunch and began to pack down, which speeded things up- a little.
I then had a horrendous drive home through downpours which sometime reduced visibility to fog conditions and got home about 10.00.
But-taking one thing with another- it was generally quite a good show and I''m glad I went-. It certainly proved that me going and Teddy covering works.
Until next time
Adieu

I have just completed a new calligraphy commission.

The brief was for the quotation and a border with lots of weapons and a small Hawkwood shield.

It turned out a bit more colourful than previous ones and I used acrylic gold for the background, as that much leaf would have pushed the price up quite a lot... 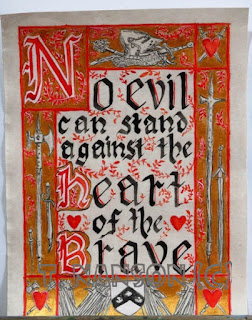 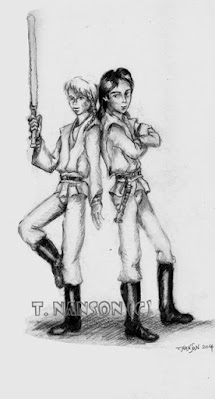 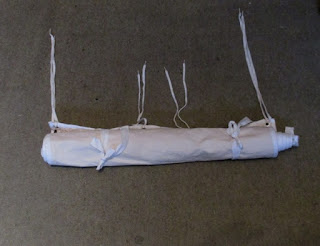 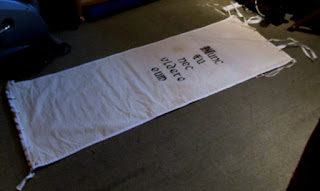 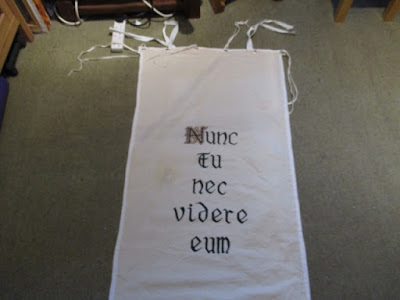 Here is a rough sketch of a painting idea from my sketch book. 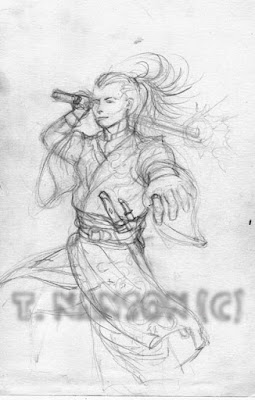 This may well become a painting at some point.
Until next time
Adieu 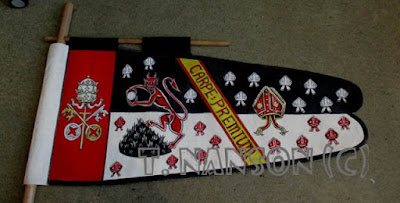 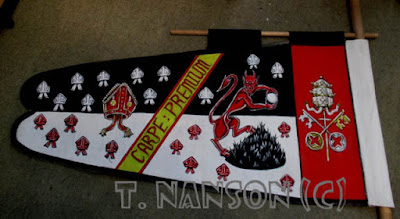 Jack In The Green 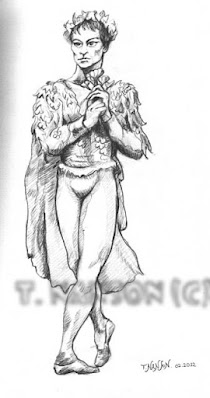 The image I used for this was only a few centimetres tall.
Until next time
Adieu