Over the Easter weekend I was attending the annual national science fiction convention in Birmingham.

As usual, I took some uniforms to wear as hall costume.

There was a Regency Dance on the Friday night, so I wore Ball Dress for the 18th Hussars. 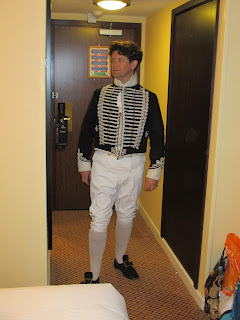 I also wore a Civil Diplomatic uniform that I had been lucky enough to find at the re-enactor's fayre I had been to at Cressing Temple the previous week.

The coat looked as if it might fir, so I divested myself of the Napoleonic Infantry Colonel's coat I was wearing and tied it on. It fit, then I found out that the trousers would fit easily and looked  ( unusually - I have quite short legs) to be about the right length. It was in very good condition, with blue velvet on the cuffs and collat and proper oak-leaf braid.

Then I saw the price and bought it quickly- £35.

I tried the whole thing on whan I got home- it could have been made for me. All I had to do was mend one of the collar hooks!

I found my diplomatic folding cocked hat and added some medals and an order star and was ready to represent the Queen Empress...

On the Saturday I wore my full 18th Hussar uniform, as I had done on my wedding day last year. This time, however, I left the sword and sabratach at home...

We had a great time at the convention and I sold one of my cartoons in the artshow.

Working on a new oil painting. 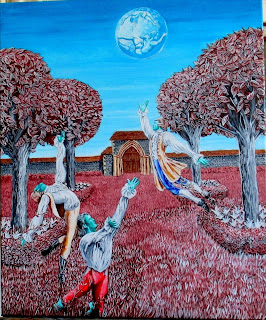 This is the oil I am currently working on.

There’s still quite a bit of work to do tightening up the various elements of the landscape and figures.

I’ve some ideas for a title, but it hasn’t been settled yet.

I’ll post about it again when it’s made a bit of progress.

Adieu
Posted by Tom Nanson at 03:30 No comments: 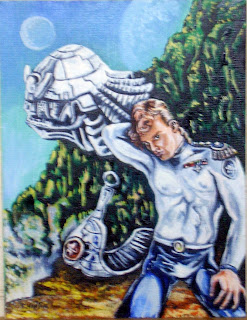 This is a small oil (about A5), which I sold a few years ago.

The Space Corps are always looking for a few good men...

Adieu
Posted by Tom Nanson at 02:30 No comments: 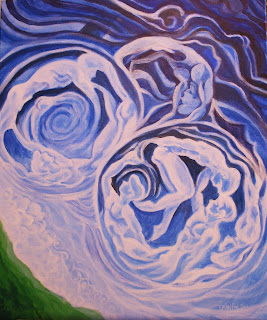 I recently completed this acrylic painting.

This is another that falls into the ‘letting my subconscious out for a jog’ category.

Short of deciding that this would be sky/ air/wind  based, I let the painting lead me where it would- until it told me it as finished.

Adieu
Posted by Tom Nanson at 04:37 No comments: