I had the idea of a Knave of Hearts costume consisting of an outer tabard in hearts livery that was removed to reveal a high-waisted renaissance-style doublet and hose with a padded heart codpiece beneath. The name of the costume is a terrible pun, for which I am justly famed.

For elegance, I wanted to be able to undo one point of the tabard and have it slide down the opposite arm.
This would also be the first appliquéd costume I had attempted. I further resolved that I would use, as far as practical, cloth that was already in my stash.

I also found an illustration from Alice in Wonderland that showed a herald’s tabard with heart livery. 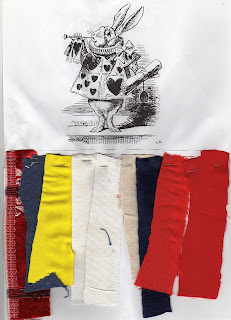 In practice, I only purchased the yellow stretch satin, the canvass and the trimmings for this project.

Here are the trimmings and braids. 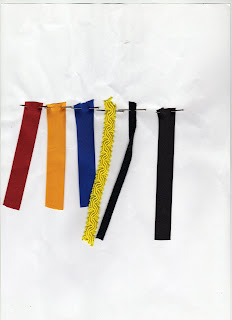 I spent some time drawing up ideas, using this playing card as a base for the design. 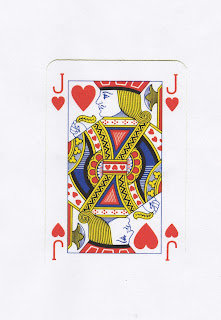 Here is the sketch I made for the project.  You will note that I was originally going to make a padded leaf to hold , but , in the end ,  decided that this would cause problems with the presentation. 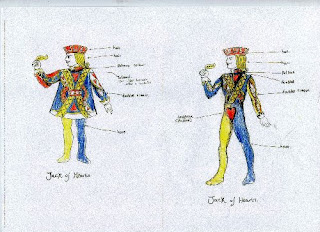 Given the complexity of the final design, I decided that I would flat line the garments and bind the edges with bias.

In Part 3, I will deal with the making of the tabard.

Making 'Dastardly in Motley' :Part One

In 2005, ten years since it had last been in the UK, the Science Fiction Worldcon came to Glasgow.

I had stage-managed a costume set for my friend Miki Dennis at the 1995 Worldcon and had been given a Best Presentation award. I had  also won awards at British Costume Conventions and Eastercons, but I had never entered one of my own costumes in a Worldcon masquerade.

I had, however, been working on this costume for about six months and, whilst I was well aware that group entries won more awards at Worldcons, I decided I would enter it anyway.

The entry was based on the Jack of Hearts in Alice in Wonderland and I decided to call it ‘Dastardly in Motley’. 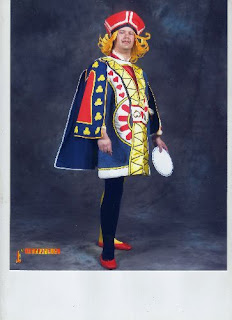 I was awarded Best in Class (Journeyman) and must now compete as a Master.

Over the next few weeks I will be showing parts of the process I went through to make this costume.

In part two, I will talk about the concept and design.

Adieu
Posted by Tom Nanson at 04:29 No comments:

I have recently started a small painting, based on a previous work.

I  am working in oil on canvas  have laid down the first  blocking in of under-painting and started to add some detail to the landscape.

I have also started to define the Peacock and Small Tortoiseshell butterflies.

The painting looks a little strange at this stage, because I use Indian Red as the under painting colour for all the areas that are to be green.

This painting is at a very early stage and, as yet, has no title. 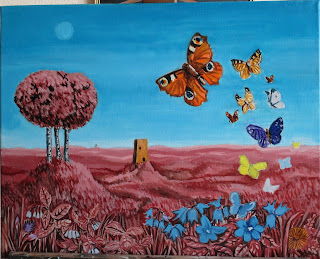 I will take another picture of it once I have worked on it further.

Today I am going to talk about the heraldry I designed for the de Velmont family. As many of you should be aware, I re-enact as Bishop Thomas de Velmont in the medieval period.

When I first considered the arms for the de Velmonts, I hit upon a cant ( a heraldic pun). In this case, it was a dreadful mix of 'olde' English and French: 'Devel Monte', meaning 'The devil climbs'. I also settled on the motto Carpe Premium ( Seize the Prize) and this led, inexorably, to the first blazon:

Per bend sable and argent a demon rampant gardant gules its feet on the bend holding a pearl proper. 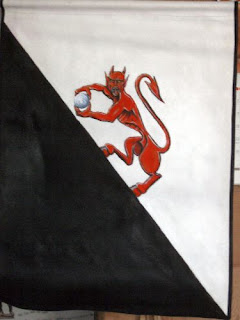 The bend represented a hill and the pearl, the prize.  This achievement was used in the Far Isles and  I now call it 'de Velmont ancien'.

When I joined the Paladins of Chivalry, however, they were not keen on this being my main achievement, so I presented them with the arms I used in the Far Isles as Sir Igor Ross, which they approved. This is now the blazon I use for de Velmont . 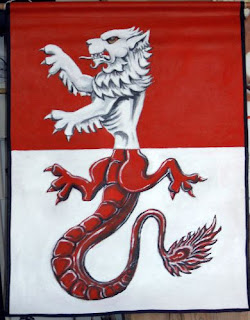 As my character is a bishop this is impaled with the arms I devised for the See of L'Aquila. 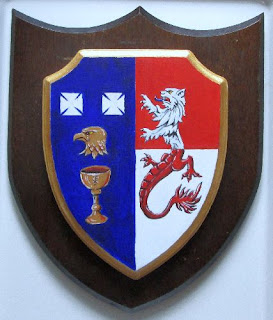 The arms of an office is always charged on the dexter.

Not wishing to lose the cant, I adopted the demon, pearl and hill as one of the Bishop's badges and used it on his standard

You will note that the Papal States is in the hoist, as the bishop is an ecclesiastical knight by papal authority (even though he is himself English). This is the flag his soldiers would follow and rally to (their Colour) and it would be 'trooped' in front of them so that they would easily recognise it.

The bishop's soldiers would wear a livery of  black and white with a red mitre badge on the left (white) side. His Vintners would have a large red mitre badge and his Centner would have the demon, pearl and hill badge.(A Vintner commands twenty men; a Centner, one hundred)

The badges and livery also led to the Bishop's crest 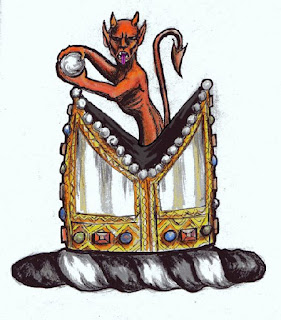 I made a crest and mantling for my great helm.

I think I've managed to achieve a good look to the heraldry and a consistency to associated badges, crest and livery.. It continues to serve me well when I present the bishop to the public.