I painted this acrylic before I started using airbrush. 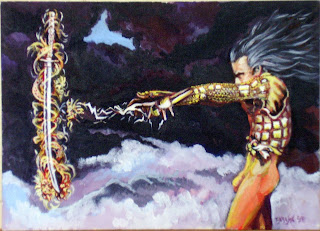 I was attempting to portray the use of magic, with the katana being enchanted by the spirits of the dragons wrything about it.

At some point in the future I may try doing a second version and see what effects I can achieve now with the new tech..

Adieu
Posted by Tom Nanson at 04:20 No comments: 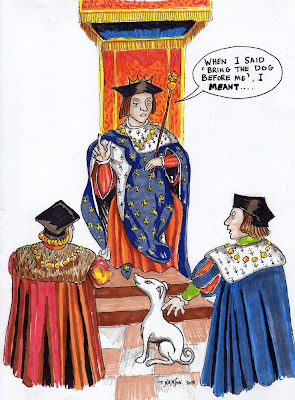 I have been doing more work to my current oil painting.

I have done the first glaze over the underpainting. 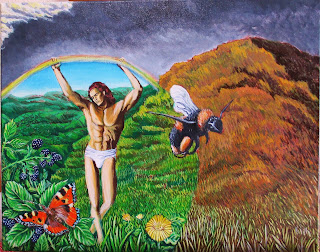 I have also decided on a title. It will be called  ‘Realm of the Gods’..

I  will post about this one again when it has progressed further.

Adieu
Posted by Tom Nanson at 04:53 No comments:

I finished this acrylic  painting in February  2016.

I call it ‘ Face The Music’, as that phrase referred to facing the rigging (which resembled a music stave) when preparing for punishment. 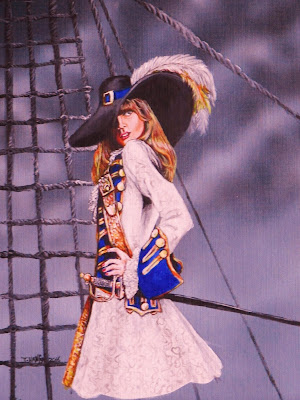 I got married in April.

Teddy and I have been together for over twenty years and the law here has finally caught up.

As Teddy is notorious for not getting his costumes finished in good time for events, I decided that I would get my kit made by someone else, which meant that he would have to do the same.

I had always wanted a Napoleonic hussar uniform and had even bought patterns, but the massive amount of braiding had always put me off.

I decided on the 18th hussars circa 1812. It was made by John Norris and his good lady. He is currently the Lt-colonel of the 18th in the Napoleonic Society.

I collected the finished uniform a week or so before the wedding.

Teddy took a lot longer to decide what he wanted, but finally settled on a 1790's suit. This was made by Zack Pinset and , due to problems with the mill that the cloth was being made at being flooded, we finally went down to Brighton to collect the suit on the Thursday before the wedding.

The wedding went very well, though it's still a bit of a blur in places.

I haven't had the official photos yet, due to our volunteer photographer being worked off his feet since then, but I had a few sent by other folk.

Here's one of us cutting the cake. 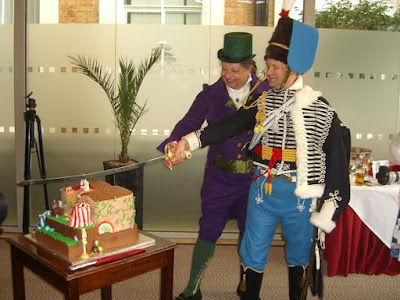 I may blog about this again once I have had the official photos.