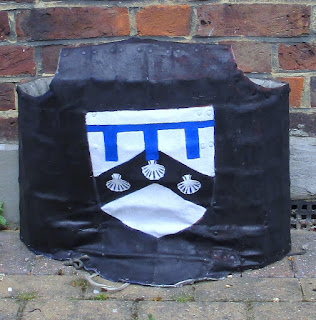 This is a Visby-style coat of plates I made for one of the other members of the Paladins of Chivalry.

It forms a canvas tabard shape with two ‘T’ arms folding round under the arms to buckle at the back.

I formed panels of  small rectangular plates by lacing them together with leather laces. These panels were then riveted to the front and fold-round parts.

I used leather plates for back of the tabard and for any odd and shaped gaps on the front, particularly round the arm and head holes.

This armour affords the wearer considerable flexibility whilst fighting

A quilted liner in attached to the inside (sewn at the top and with lacing at the sides and base, to allow access to the plates for maintenance).

The coat is painted black with the arms of the son of Sir John Hawkwood on the front. 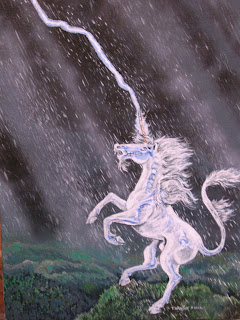 A friend of mine described a picture she wished she could paint and I liked the idea.

I asked her if she would mind if I painted it and she said that would be fine.

As a herald, I was determined that my unicorn would not be just a horse with a horn. I call those Nearlycorns

A true unicorn has the body and head of a horse, the tail of a lion, the legs of a stag, and the beard of a goat and the twisted horn (probably of a narwhale)

In order to get the feeling of the lightening strike, I need to show the bones and spent some time researching the skeletons of horses, deer and lions.

I then spent some time joining these together so they looked like one creature and painted the resultant skeleton in shades of electrified blue.

I then added the flesh in layers to try to get the partially transparent effect.

The background I worked in airbrush and fine brushstrokes to get the wave effect of driving rain.
I am still quite pleased with the result.

Adieu
Posted by Tom Nanson at 02:02 No comments: 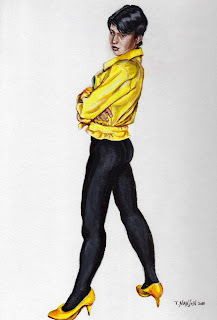 This is a portrait I painted some years ago of our friend Ben when he was eighteen.

We were all going to a Science Fiction Convention and he asked to borrow something to wear.

He ended up choosing one of Teddy’s lycra body suits, a yellow bomber jacket and high heels.He hoped that this would impress a girl he was interested in. It did....

He decided to pose for a photo and I used that for the painting.

Now for some  more Medieval fun... 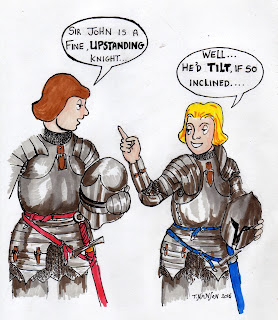 In this painting, the young recruit is off to defend home and family from the foe.

I based this work on a photo I took  of a young man at Loncon in 2014. I did warn him he might be immortalised in paint.

I displayed the finished work at the following Eastercon – and his parents bought it...

Adieu
Posted by Tom Nanson at 04:17 No comments: