Some few years ago our friends John and Barbara were having a significant wedding anniversary and her sister , Kate, commissioned me to do a painting.

She asked me to try to include all their mutual interests. These included Science Fiction and Fantasy books, series and films; putting on firework displays, computers and Filk Music ( for those not in the know, Filk is -mostly- folk-type music based on SF & F).

Kate also told the tale that Barbara's father had once told John that he expected a suitable number of goats and camels to be provided as bride-price. After the wedding John presented him with a substantial pile of plastic toy goats and camels.

Barbara had also once told me of a dream she had had about living in a teapot -rather like the dormouse in Alice in Wonderland.

I sneakily snapped a photo of them at a Science Fiction Convention to use for the picture..

This is the painting. 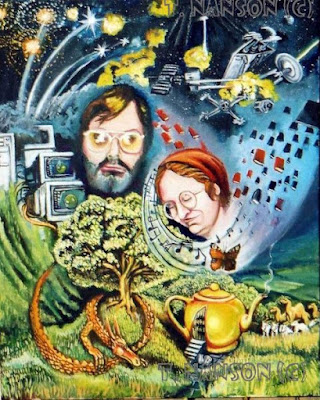 You can tell that this was painted in the 1990's by the Babylon 5 spacecraft, the bulky computer monitors and tower and daily milk bottle and paper on the teapot doorstep
I  used my usual circular forms and the transmutation of one thing to another. The fireworks change into the space battle, which changes into the books , which change into the music.
They really liked the picture. Kate liked it so much she insisted on paying me more than I had asked for it.
Until next time
Adieu