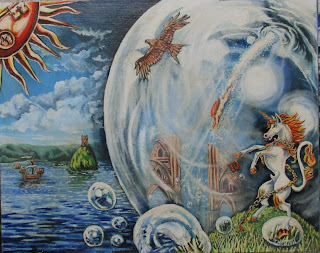 The title refers to one of the names for the tor, Ynys Witrin .

It was inspired by the various legends and stories about Glastonbury.

I have referenced the Christian legacy with the crossed keys on the heraldic sun and the ruins of the abbey .
The unicorn  and the eagle represent the chivalric and questing aspects of the Arthurian legends

The largest water drop was meant to also resemble a fish bowl. The diving figure is a back reference to a much earlier painting inspired by an observation gallery at a swimming pool.

I also wanted to play with paths and perception in this picture, as I tried to give the viewer several different paths to explore within it.