And now a bit of fun on a piratical theme. 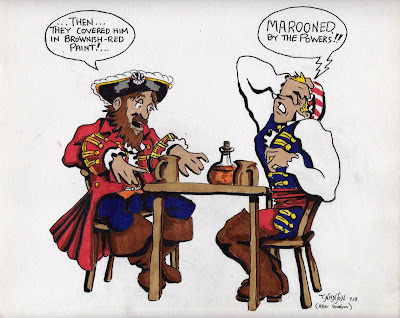 I have occasionally tried to make three dimensional works

This is a small figure of a superhero called Blue Boy. 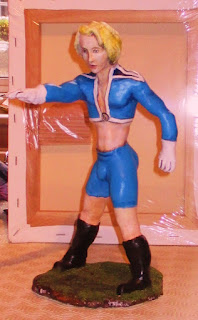 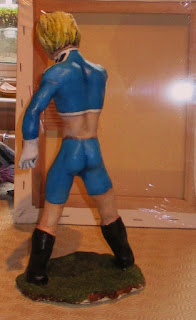 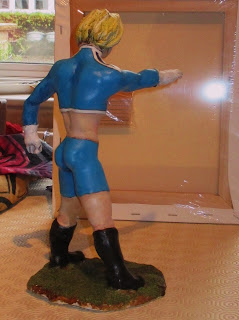 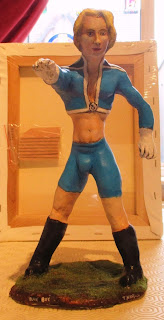 It is made of modelling clay over a wire base.

It is painted with acrylic and the base is textured using materials for model railway landscapes. I used a spray varnish over the whole surface. It is about 28 cm tall

It is not my first attempt at a figure, but it is the most successful to date.

I found it very interesting building a figure up from the inside, as opposed to carving one out of a wood block. At some point, I will have another go.

Adieu
Posted by Tom Nanson at 04:23 No comments:

As my by-line says ‘artist and costumer’, I think it’s time for a post about costuming.

I have always been of the opinion that Steampunk is more than cogs and goggles.

The first uniform was World War 2 based 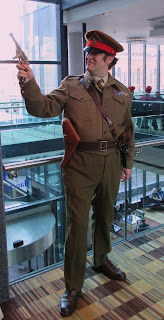 I can, occasionally, be subtle. At first glance, this looks like any WW 2 uniform.

Allow me to deconstruct it.

The trousers are no.2 dress; the blouse is no.3 (battle) dress and has Dr Geoff Banyard skull & goggles badges on collar and epaulettes, as well as major’s crowns. I also added real British medal ribbons, but carefully in a random order.  There is a Dr Geoff unit badge on the right shoulder for the eighteenth regiment, showing a badger with a gun.

The shirt and tie are modern British Army and the hat is Soviet Army, but with a Royal Ordinance Corps badge.

The belt of the Sam Browne is a modern reproduction, but the shoulder strap, holster and accessories are genuine. Sam Brownes were never worn with battledress.

The gun is a Steampunk sculpture

The second uniform was more Victorian Steampunk and felt like service dress for Space Service. You will note there is no sidearm- but who needs a sidearm when one has a Type 32 Winston Class Dreadnaught? 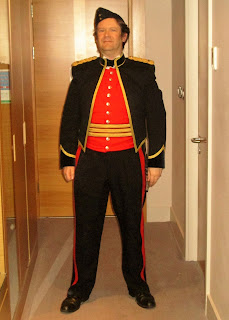 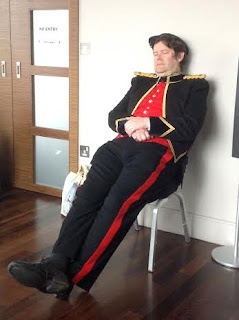 The seated pose photo was taken by Jackie Burns and is used with consent.

Once again the uniform hangs together well.

It is made up of a Blues & Royals Officer Mess Dress jacket with major’s crowns on the epaulettes, a wing collar shirt and Victorian stock, a Georgian Uniform waistcoat, a Guards officer’s waist sash, Royal Artillery No 1 dress trousers and a Royal Engineers forage cap.

Adieu
Posted by Tom Nanson at 07:49 No comments: 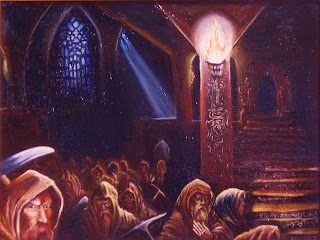 This is a very old painting.

I wanted to evoke the feeling of dwarves carving out an underground city.

I painted this in the 1980’s and reworked it in the early 1990’s, but I am still quite pleased with it and still have it up on the wall.

I think this was the third oil  I ever painted.