Here is a large acrylic landscape that I painted when I did my Foundation art diploma in the mid 1980's. 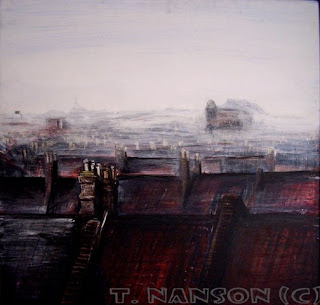 This is the view from the old Wimbledon Art School Annex at Palmerston Road, looking towards the theatre and the old Town Hall.
The theatre originally  had a little temple structure on top of its dome with an angel and illuminated globe, but these were taken down during WW2, as German pilots were using them as a landmark.
They had not been replaced until the 1990's , well after  I did the picture.
The picture also shows the Borough flag flying over the Town Hall, as it was still being used by the Council. The Council subsequently moved to an office block in Morden and the old Town Hall was converted to become part of Centre Court Shopping Centre.
It was quite a clear day when I did this picture and, if you look very carefully, you might be able to make out the spire of St Mary's Church up on Wimbledon Hill.
I called the painting "Roofscape."
Until next time
Adieu