Some friends of ours are members of the Tolkien Society and when we last stayed with them the conversation moved to the subject of balrogs.

I have always maintained that balrogs could not have wings. If  the balrog in Moria had wings, why did it fall? Yet image after image of the balrog show it with wings.

I had a look at the relevant part of  Fellowship of The Ring and the references to wings are as follows:

It also does not describe the physical form of the balrog , except as 'a dark figure streaming with fire' and indicting that it was a large size. Other references in Tolkien's work just refer to them as spirits of fire.

Gandalf also says, "The dark fire will not avail you, flame of Udun."

I decided to produce my own image based on this and on a hobbit's assertion that  if  Aragon was evil he would look fairer and seen fouler. 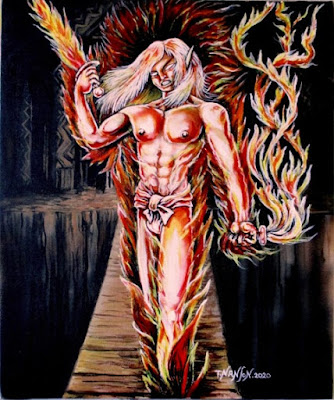 I have included both the flaming sword ( later shattered by Glamdrung) and the multi-thonged whip.
I'm calling this picture "Dark Fire".
Until next time
Adieu
Posted by Tom Nanson at 08:38