When last we met it was Thursday at the Worldcon in Dublin and my art works were safely on display in  the art show...

We now continue with the story...

But first, here is a cute Glider Elf for your enjoyment: 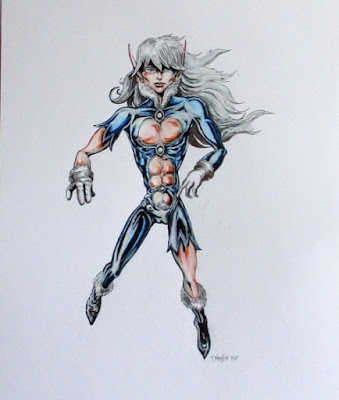 Now, back to the story:

There was still a bit of running round due to the masquerade, but we did spend a bit of time on Thursday afternoon at the convention.

Friday was the day before the masquerade, so we spent quite a lot of time waiting about, being told how the show would work, telling people what we needed, waiting etc. We then had to come back in the afternoon for a technical rehearsal, which had to be re-scheduled twice, as nobody on the committee had thought to check into the work hours regulations for the conference centre staff.

Once we had established when our rehearsal actually was ( and I had had to buy an emergency sandwich for lunch) we were then kept waiting for over an hour, whilst the tech people and the centre staff got side tracked about recording rights. We then did one walk through, which didn't result in us getting the lighting  and , particularly, the blackout we wanted.

Maggie was unhappy and wanted to do it again, but they said there was no time. The compromise was that Mike was dispatched  to the lighting desk with our script and the threat of Maggie if they didn't do it right on the night

The other thing that happened was that, suffering a mild contact with the floor, the resin spearhead decided to break close to the milliput base. We spent lots of time trying to glue it back together and supported it with a kind of wire frame, but it was still fragile, so I suggested we take the other clear resin spear head with us to the show,then, it the head broke, Teddy could sigh dramatically and pull out the spare.

The only programme item I made it to that day was a version of Just A Minute, which had our friend Seanan McGuire as on e of the contestants. It was quite funny , they got most of the rules right and I saw most of it before I had to leave for the tech rehearsal...

Saturday was Masquerade day. We managed to get to a few things in the morning, but we had to report to backstage by 5.30 PM.

One of the programme items I did get to go to ( I think it was on this day, but my memory is.... Where was I...)  was a Phil Foglio Girl Genius Radio Play. I have read Phil's work for many years and have followed Girl Genius from the beginning. I have also attended live performances of the Radio Plays before, but THIS TIME,,,, When Phil asked for people in the audience to give an audition to play a role I spoke up as.. Krosp, King of Cats.

I was appointed to the post and took the opportunity given by the other roles being assigned to caste my eye over the script. It rapidly became apparent that ONLY PHIL had ever seen this before. Even Kajia (His wife), who co-writes the comic and was playing the lead ( Agatha Heteradyn) had not seen it before he handed it out.

Anyway, despite it being the blindest of blind readings, it all went extremely well, was very funny and very enjoyable to do. There were only two or three stumbles and only ONE occasion where someone had to go back and read something again.

The audience obviously enjoyed it and I clearly brought something to the role I had been assigned, because for the rest of the con people kept coming up to me and saying "Hail, Krosp!"

Right, back to masquerade. It's 5.30; I in part of my costume;I have my supper sandwich (which I have been told I have to eat in the Green Room) and we are waiting to go to a desk, sign in and then go back out so we can be called in again and lined up in the right order.

Two of us are guarding all boxes of helmets etc, when I realise some of the group have signed in and not come back. I sign in and am told they're not coming back now, so I have to dash off and get them to come back to help carry all the stuff in.

With all this faff and further waiting around and having passed our paperwork for workmanship to the judges and and having been workmanship judged it is now well  after 6.00 and I feel the signs of going Hypo, so I inform our Den Mother ( who is in charge of us) that I am going to the Green Room to eat.

I get to the Green Room and a staff member tries to stop me going in ( Why was unclear) , which is the point that I come close to losing my temper and tell him that he'll have a medical emergency if I didn't go in and eat my sandwich NOW. I wasn't very clear whether it would be a medical emergency for me..or for him. Anyway, he let me in.

I had a false moustache glued to my lip for the performance and, whilst eating, discovered that not only does my sweat polish silver and clean old coins, it also dissolves spirit gum. I finished my sandwich , picked up the fallen moustache and returned to the den to find...

... the spear had been knocked and the spear head had fallen to the floor and shattered.

Luckily, the milliput I had used to make the base had never set properly ( still can't work out why, I mixed it half and half as usual) but this meant were able to dig it out of the socket it was glued into and fit the spare spear head. I, however, took charge of the spear and wouldn't let anyone else touch it till it was time for us to line up and go on ( if I broke it, then it was MY fault, but if someone else had broken it....)

Anyway,we were the first entry, we lined up in time and our entry went without a hitch, we then were led off and were allowed into the audience, so  we saw entry 13 onwards.

There were over twenty entries and the standard of both costumes and presentation was very high.

When we came back for the result of the Judging, we were awarded Master Class Workmanship.

Once we have been sent a link to the photos, I will post again purely about the set.

The masquerade winner was a Kelpie costume that I hope to be able to share with you once we have the link.

We finally got back to our digs after midnight and collapsed.

I shall, dear reader, tell you of Sunday in the soon to be released PART FOUR...