We have just been to Follycon II, the British National Science Fiction Convention, which was in Harrogate this year'

The Journey up was horrendous. We had to pick up Teddy's cousin, Gail, from Walthamstow and, setting out just after 10, we didn't get there until after 12.

Then we stopped for Lunch at the services just before the A1(M) and began our trek. The traffic was horrible and, as usual, it had just started moving again just when we were near services, so the temptation to carry on was strong.

Towards the end of the journey, I realised that I was getting close to going Hypo, but the TomTom ( Yes, Tom has a TomTom) told me we were only an hour and a half from destination, so I thought I could make it if I ate as soon as we got there.

Unfortunately, the Machine did not seem to adjust it's prediction when we hit traffic again, but, by this time, we were off the A1 and onto B roads.

Teddy helped a lot as I finally negotiated the streets of Harrogate, dropped Gail at her hotel and, with some difficulty, located the way into the car park at our hotel. It was now 8.30 PM.

Teddy dealt with the hotel and they produced some ham sandwiches pretty quickly.

I  ate sandwiches and slowly recovered and was Ok after a night's sleep and a good breakfast.

As the theme for the Con was Mad Hatter's Tea Party, I took costume with interesting hats. I wore Fifteenth century  on Friday, with blue doublet, black hose, thigh-length back boots and a black borolay( Can't remember the right  spelling- padded roll hat with side drape and lirripipe ).

Unfortunately, I didn't get any pictures of that one, but here is the Crimea War Green Howards uniform I wore on Saturday. I chose that one due to the unusual shape of the hat, which is halfway between a shako and a kepi. 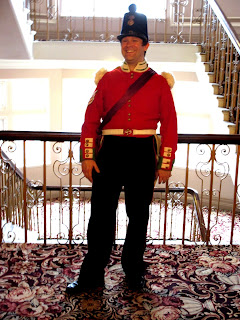 I will blog further about events at the Con
Posted by Tom Nanson at 04:00