On 5th May I went to a craft fair at Hatfield House.

I had ordered a medieval tile (based on a mitre tile I had seen in the V & A) at one of the reenactors markets and ,unfortunately, it hadn't been ready for collection at the next market.

The lady who made it said she would be at Hatfield and would bring it along in case I could get there.

As I found out the event was from Thursday to Sunday and we had a guest over the weekend, I went along on the Friday.

After a bit of wandering around, I found her tent and collected not one, but two versions of the tile that she had made me. She had done one as a modern thickness tile and one as a full medieval floor tile. I thanked her, carefully wrapped the tiles in bubble wrap and newspaper and put them in the satchel  I had brought with me for that purpose.

I then wandered around the fair a bit more and found that there were several places doing have-a-go courses in things like paper making, wood  working  and mosaic.

Then I walked past one of the sculpters' stalls. I was just admiring a beautiful angel commissioned for Westminster Abbey and  a marvellous five foot high heraldic dragon, when I saw that there were people working at tables in front of the stall.

The sculpter, Simon Keeley, told me he was running a  one hour beginners course. and asked if I like to have a go. It was a tenner including a five or six inch square block of Maltese limestone.

I signed up for the next class.

He asked if I need a book to look at for inspiration, But I said I thought I'd be OK.

First we had to Try chiseling a straight line on the back of the block, Which I achieved fairly easily, Then we had to chisel a line round the top of the  sides of the block as a 'stop' for removing the background.

I drew my design onto the block and was shown how to start removing the stone around it with the chisel. After a while I decided to use a sharp scribe to set my design in, as the pencil was becoming blurred.

Then he showed me how to remove larger amounts of stone in layers by first knocking of pieces at the corners and then working inwards with a four pronged claw punch, leaving a cordon round the
edge of the design.

I then worked back outward to clear the cordon and started to use the small chisel as a gouge to work into the design. The stone was very easy to carve, but that also meant that details were quite fragile and you had to be very careful not to chip off  anything you wanted to keep

Simon was a good teacher and was quick to show people how to handle the tools and even how to mistakes could be corrected.

If you want to see Simon's work you can see it at www.simonkeeley.co.uk.

My piece was clearly a mitre by the time I stopped working and I was pleased with my progress.I had left the background with the claw marks on it as I quite like the effect.

The process was rather like a mixture of wood carving and carving into a dried plaster model. I found it very satisfying.

I got it home without damage (I had gone up by train) and have spent a few hours doing some more work to it with a steel pick, fine sandpaper and very fine grade wire wool.

As you can see I changed my mind about the background.

This is how it ended up: 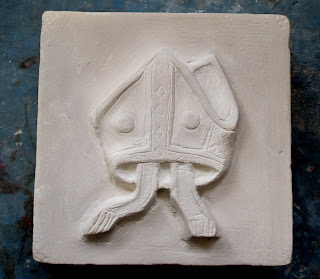 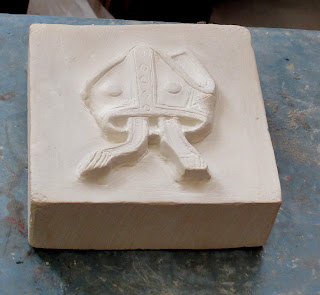